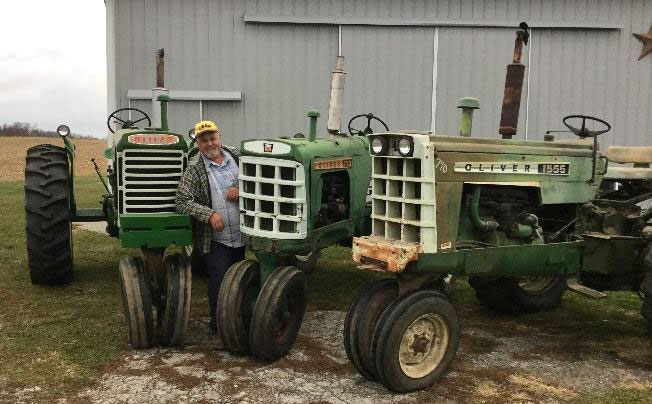 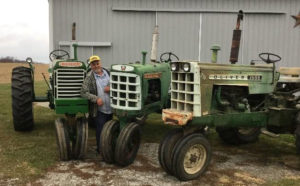 Jim Brown is a Buckeye Oliver Collector member and lives in the Croton – Johnstown area with his wife Vicky. They have two sons and a grandson. Jim cares for his late parent’s farm of 144 acres which has been in the family for 100 years; he is the 4th generation. Jim has had Oliver tractors most of his 59 years with the exception of one orange one. Jim grew up with a WD45 that his dad owned. Jim says “If you ever worked ground with one of those you can really appreciate an Oliver”.

Jim’s grand-dad had an Oliver 66 which he bought new in Newark, OH and did most of the farming with. Grand-dad also had a 60 and a 70 and a lot of implements. Grand-dad gave Jim the 66 when he was 14 years old. Two years later Jim traded it for a Super 88 with a wide front end and power steering. It was a great tractor and wishes he had it back.
Jim’s dad bought a 770 and a 1655 from Ohio Foundation Seeds to upgrade their equipment line and improve their farming operation. 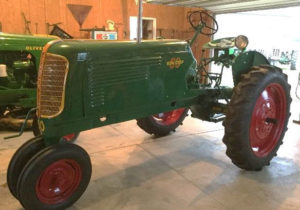 How times and the farm have changed. Jim works full time in town. He uses an 1855 with a 15’ bush hog to keep the farm looking nice. There are a lot more tillable acres, a lot less pasture today. “I always liked going to Shady Knoll Farm Service in Croton to look at the Oliver equipment and talk to Wilmer Prushing who is the owner and a lifelong friend” say Jim. He also liked visiting Straits Farm Equipment to see what used equipment was there. Jim has mostly John Deere implements all pulled by Oliver tractors. People ask him why he does not have John Deere tractors he says “I need something reliable”.

Jim has owned more than 15 Oliver’s and loves to collect; he rarely sells.

Thanks Jim for a great story and keeping the tradition alive.