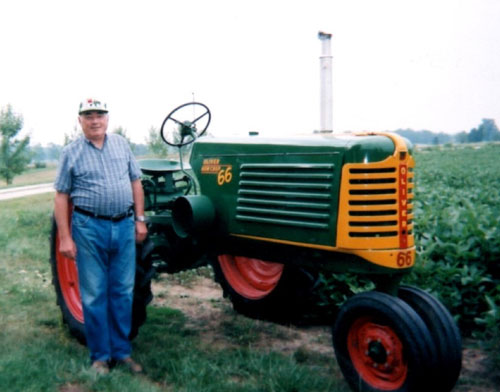 Martha and I live in McCutchenville, OH where I am retired but always busy with some job every day, especially working on my Oliver tractors and equipment. My son Dan and grandson Zachery help with my collection and Dan has several pieces of his own. Growing up and farming with Oliver equipment made it just a matter of time before my collection started. My collection got started in 1996 with an Oliver 60 when I turned 60. My latest addition is a No. 2 potato digger.

My favorite tractor is my 1949 “99”. When I was 12 years old I heard 2 farmers talking about their neighbor who, “Bought an Oliver 99 just to run his threshing machine. It’s the only thing he can use it for. It’s too big to use in the field.” I wanted to see it then but never had the chance until 33 years later at his sale. At the time I didn’t have even a quarter to spare but remembered who bought it. When he advertised it 15 years later I was able to own it. Everything on it was original including the spark plugs. It probably has less than 750 hours of use. Good Year has confirmed that the code on the rear tires dates them as 1942, which means they are pure rubber, not synthetic. To this day they show no age cracks, etc. At a show a man told me, “My next door neighbor bought that tractor when I was eight years old. I am quite sure that the only time it was used in a field was the spring when the neighbor helped plant our crops because my brother had lost his life in the Korean War.”

My favorite implement is the 7 foot Oliver double cultipacker with a seat. I used to ride one like this being pulled by horses.

My favorite memory is on a Thanksgiving Day when 3 of my sons and 3 of my grandsons plowed with a walking plow on our farm. My 4 year old great grandson walked along side with his hand on the plow beam and a big smile on his face. Family involvement is very important to me. 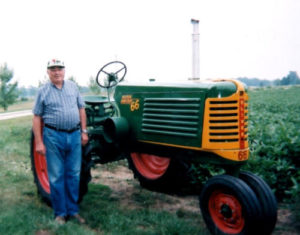 All are restored but the 18-27. I also have 8 Oliver walking plows and several sulky plows, 20+ Oliver tractor plows from 1 to six bottom, Oliver disc plow. Most of the plows are restored. No. 17 manure spreader, double cultipacker, No. 22B hay conditioner, No. 2 hay rake, No. 520 baler, 3 horse drawn mowers, No. 55 2 row potato planter and a No. 2 potato digger. I have purchased most of these pieces from auctions, ads and the internet.

Whether within the Buckeye Oliver Collectors or anywhere in the Oliver Hart Parr Collectors group I most enjoy the ability to talk with friendly and like-minded people who care about sharing this country’s great agricultural history.