Allen and Karen live in Gibsonburg, OH on what was originally Allen’s parent’s 110 acre dairy farm. They have been married 55 years and have a son Scott & Leanne and a daughter Bonnie & Jim and three granddaughters. Everyone lives on the farm which now has three homes. Scott also owns the farm next door. Scott helps with the farming and Jim does the restoration work.

Allen was born and raised on Oliver tractors and still farms with them. Karen is a big part of the farming. Her favorite job is running the combine.

956 Oliver Super 77 was the first tractor in their collection, bought the year they were married. Their family collection now includes a Super 55 diesel, two 550’s, Super 77, Super 88, Super 44, two 440’s, a 1600, 1850 diesel, 1850, 1855 and an OC46. Karen would like to add the three beauties to the collection and Allen would like a mist green 880. Most of these tractors have been purchased from Stroman Implement and
Boellner Implement. 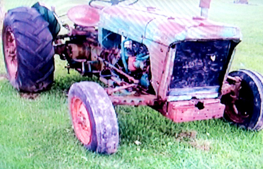 The favorite memory and story involving their collection is Karen’s 550. As the story goes this tractor was purchased as a parts tractor – brown and the wheels locked up. As Allen and Jim got it broke free and soon it was running Karen became excited that it was going to be more than just more parts on the shelf. Karen thought it looked nice enough it should be sold. As Jim finished the restoration the holidays were coming so Allen had a decal made the said “Karen’s” and placed it just above the 550 decal then gave it to her for Christmas. Now she could not sell it; “it would be rude to sell a Christmas present”. This story was published in the Hart-Parr Oliver magazine March/April 2011.

Allen says one of his favorite things about being a Buckeye Oliver Collector is meeting other Oliver collectors.