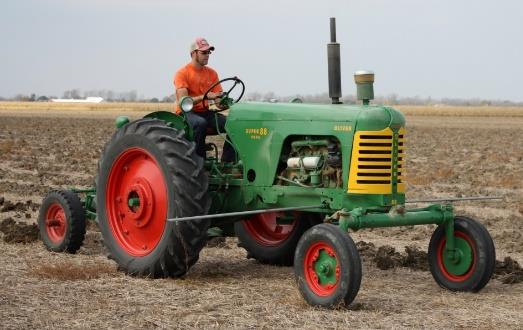 Oliver years on the Farm,

I believe our family’s love of Oliver’s started in 1956 when my Dad, Bob, bought a late model fleetline Oliver 77 diesel from A.J. Boellner in Maumee. He also bought a new Oliver 3 bottom hydraulic lift plow and a new 22B mowing machine that we still have and use to mow wheat stubble. This was in the days of pull type equipment so the 77D got used for all heavy tillage work, running the pull type combine, corn picker, baler, manure spreader, etc. Our MM model ZA was the loader tractor and did some finish tillage as I got old enough. In the summer of 1959 Dad bought a used Oliver 60 with a 2 row mechanical lift cultivator. This is where I learned to cultivate.

In 1961 Dad bought a used Oliver 64 grain drill which we still use occasionally. He also traded the MM ZA and loader for a MM 445 and loader. Then came another Oliver plow so we could plow with 2 tractors. We still have the MM 445 as our loader tractor.

In 1965 after renting more ground, Dad found a real nice Oliver 88 diesel standard tractor for a very reasonable price and then a 4340 plow to go along with it. He kept the 88 for about 10 years then sold it for what he paid for it and never spent much on any repairs. What a sweet running tractor it was, wish we still had that one!

Penta County JVS was to open in the fall of 1965, my senior year of high school and I wanted to enroll in agri-mechanics. Wishy Boellner brought one of our tractors back from the shop and Dad asked him if they could use some summer help so I had my first job off the farm. I worked summers and vacations also during my 4 years at Ohio State. Over this time Dad bought a used Oliver 241 disk which we still use ahead of drilling wheat in the fall and a new 245 field cultivator. Then in 1969 he bought a new Oliver 1650 diesel with a set back front end and a new 565 4 bottom plow. How we learned to love that tractor, still one of our favorites. It is plumbed up to run our 5100 White 6 row planter. We still have the plow but it has been sitting in the shed a number of years.

In 1970 I graduated from Ohio State and started teaching agri-diesel mechanics at EHOVE JVS in Milan, OH. I was there 6 years but my wife and I both wanted to get back “home” so I started back with A.J. Boellner in August 1976, and have been there ever since. Forty years of working on Olivers and Whites although we are now a New Holland and Grasshopper dealer as our main lines.

It was great to be back on the farm. We had a house built on the south side of the Ohio turnpike on the back corner of the farm. It felt good to be back helping Dad in the fields and he also worked part-time over winter at Boellner’s.

The fall on 1979 a neighbor passed away and his wife wanted us to farm her place so we went tractor shopping. Boellner’s had a 1950T traded in that had a rod come through the block so we had installed a new short block, went through the hydra-power, etc. After looking at other tractors Dad said he wanted that 1950T but with a cab. So after getting the tractor home and repainted we installed a new year round cab. What an addition to the family! Dad sure enjoyed plowing with the 4-14s and fitting ground with plenty of power to spare.

The spring of 1981 Dad had heart bypass surgery but died the end of July. What do I do now? The farm was not big enough to support my Mom, sister and my family. I would have to keep my job at Boellner’s. My neighbor lady wanted me to keep farming her place so with 22 acres of our farm by our house, I would still do that much and rented the rest to a good neighbor friend we knew would take good care of the land for us.

I started buying some bigger equipment for the bigger tractor. A used 285 field cultivator and Lely rotterra helped speed up field work. Then in 2001 Boellner’s had a decent White 6 row 5100 planter traded in. I bought it as is and rebuilt it as needed and set it up for no-till. I learned to plant 15” beans by swinging the drawbar

over to one side, then drive in the tracks from last years corn, circle on the far end and drive back in the same tracks. This puts a row of beans on each side of the old corn row. It takes time but it works.

With 3 sons growing up they also caught “Oliver Fever”. Our oldest son Mike, parts man for A.J. Boellner bought a Super 77 gas tractor to work with. It does a decent job pulling our Oliver #12 1 tooth subsoiler. Then he bought a nice original Oliver 66 gas with a wide front which I now use on our sprayer. With the wide front and skinny tires I can sneak down between our 15” bean rows, that put our little 60 into retirement.

Our youngest son Andy, who works in the Wood County Engineers office, went to an auction in June 2010 and came home the proud owner of an Oliver 1900 C series with FWA. It needed clutch work, one front axle shaft, transmission and rear end work but now does a good job with our 3 point chisel plow.

Our middle son Ken, made a major career change in 2007 and when he graduated from seminary in 2011 I had bought him a Super 55 as a gift. He and his wife are both ministers and serve 2 churches in Michigan. He enjoys mowing wheat stubble with the Oliver 351 mower my neighbor lady had given me. I also revamped a 3 point sprayer for spraying along both sides of the turnpike and road sides.

Our neighbor has retired from farming so we now farm all of the home place and the rented farm. With 2 sons close by we all work together and do enjoy using our Olivers. Our 2 latest additions are a White 5100 4 row planter with a 3 row 6900 splitter we use for beans and a 1750 diesel with a setback wide front end.

The tractor we spent the most years refurbishing was a Super 88 diesel wide front with a hydra hitch. It was traded in with a dropped valve on No. 6 cylinder. We found a good used head, installed all new pistons, sleeves, rings, bearings rebuilt the hydraulic pump, etc. Repainted and new decals and now use it to pull a 241 disk and cultipacker ahead of drilling wheat in the fall. Then it is time to get the 77D hooked to our drill and have more fun. With 10 Olivers, a MM 445, and a Silver King that was my uncle’s, we have a lot to keep us busy but also a lot of enjoyment.

Oliver years as a Mechanic,

When the 50 series tractors came out they would practically sell themselves. Big heavy frames, smooth running 6 cylinder engines, full power steering, tilt, telescoping steering wheel, comfortable Bostrom seats, hydra power drive (later over-under 3 speeds), built in 3 point hitch, independent PTO, live hydraulics, etc. A pleasure to drive and how many are still being used to this day, they were built to last!

And then plows; I think we sold plows behind every brand of tractor made, no one could compete with an Oliver plow.

Most 55 series tractors were sold over the years I taught at EHOVE JVS. Oliver did experience some engine problems over that time i.e., the 1855 diesels. After I was back working at A.J. Boellner’s in 1976 and going to service schools we learned the problem was simple; trying to put a turbo charger on an engine not designed to be used in that horsepower range, running the RPMs too high and operators trying to lug them down

too much. If you own a 310 Waukesha please set the high idle back to 2500 RPM, it won’t affect horsepower, and don’t lug it below PTO speed especially if turbocharged. Then with the switch to closed center hydraulics there were some leakage problems but a lot of these were changed when the gray tractors came out.

The Oliver Corp. was very supportive of their dealers. The sales reps and service people that came to the dealerships were very helpful; service schools were always very informative, hands on experiences and parts support was top notch. Their parts books were like actual pictures of the breakdown of each component or system and their shop manuals gave great step by step teardown and reassembly instructions for each procedure. I was to the Columbus branch a few times and everyone was so friendly. I made one trip with Larry to Charles City to pick up 3 tractors one fall. We got there after the plant was shutdown for the day but they took us down through the assembly line where they were building red Cockshutts and green Olivers. Then in the back lot one side was red tractors, the other side was green. We got 3 green ones, 2 1850’s and a 1750.

In 1976 when I returned to Boellner’s the gray tractors were being sold, the 2-135 and 2-155’s had just came out. What a tractor these were! Big, heavy, powerful, comfortable, with a good lugging long stroke engine, a solid rugged transmission differential and final drives. The 2-85 and 2-105 were back to Perkins engines, upgraded closed center hydraulics and proven drive trains.

Some early 2-135, 2-155’s had piston ring and ring land problems and head gasket seepage problems. A few update items here and there but still a good line of hard working tractors, many still out in the fields today. In fact the same drive train with some modifications was used in the 4-210 and 4-225 4 wheelers and through the work horse series of tractors.

Along comes the White 5100 planter line! What a simple but accurate planter idea. For some years we rented 2 – 6 row planters and splitters set up for no-till with 1950T tractors through Lucas & Wood Co. soil & water districts to start farmers looking at no-till planting equipment. This helped us sell a lot of planters even into the 6100 series. We also rented White disc chisels for fall conservation tillage.

Looking back I must say I met a lot of nice people over my years working at Boellner’s and I have worked with some very fine people, you almost become like family. I started working with Wishy and his brothers Tony and Eddie and son Lawrence (Larry) and now his son Dave and daughter Kris. Three generations and they still keep me around!

We still have a lot of customers running their Oliver and White tractors and equipment and sell a lot of parts, even out of state. Probably one of only a few people who were originally Oliver dealers.

If you are ever in Maumee stop by, Larry likes to show people his 10 restored Olivers. Only thing now for new equipment you will see blue New Holland tractors and Grasshopper mowers.