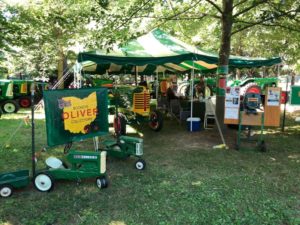 Oliver, Cockshutt and equipment were featured at the Ashland County Yesteryear Machinery Show, July 7 & 8, 2018. The Kopp’s, Don, Joanne, Larry, Bob and Jane had the Buckeye Oliver Collectors tables. They had a good turnout of people and tractors. There were 24 Oliver’s and 4 pieces of equipment. One Oliver boat motor and two Oliver pedal tractors. The show is now in its 26th year. The people come to see the tractors they grew up on. Every year the show features different tractor companies. This year was the Oliver Tractor Company and Cockshutt – were in the spotlight.

The most unique piece likely was the 1949 Goodison tractor, which was the Oliver brand sold in Canada. Don Kopp got his hands on it and it is now back to its original Oliver colors. The tractor was blue and yellow because a campgrounds had it and they painted it their colors.

Bob Kopp displayed his first Oliver that his Dad bought new in 1951, an Oliver 88. He also had a 1937 Hart-Parr like the first tractor that Bob & Don bought together. Bob had a 1952 Oliver 66 which was Joanne’s Dad’s tractor. Larry had an Oliver 60 there, the boat motor and pedal tractors. What a good time we had.